Genealogy of the families Helder/Heller and Bakema from the province of Groningen , the Netherlands.

This page is dedicated to the genealogy of the Helder/Heller and Bakema families, originating from the "Hogeland" part (especially Marne and Halfambt) of the province of Groningen (the Netherlands). 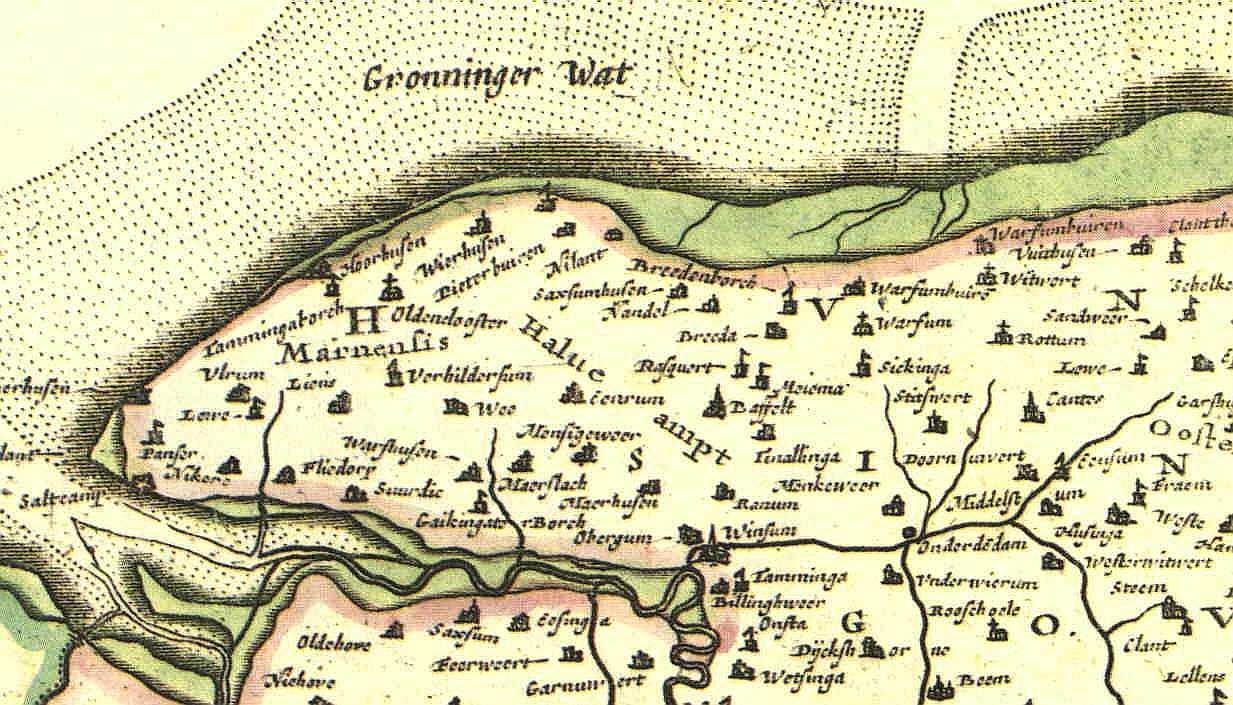 Probably associated with the fact that in the local Groningen language the name Helder is usually pronounced as Heller
it occurred that even brothers and sisters were recorded with as surnames either  Heller or Helder.
The Helder/Heller family lived originally in "Hogeland" villages such as Pieterburen,Leens, Ulrum, Houwerzijl, Hornhuizen, Zuurdijk etc. without significant migration to other Dutch provinces. In the period of roughly 1850-1910 there was considerable emigration to the USA, possibly related to declining agricultural profits and poor working conditions, but surely also by religious quarrels which led to separation from the "mainstream" protestant church and establishment of a separate community in 1834 ("Afgescheidenen") of which many members, on the initiative of their leading ministers, settled in the USA (Michigan). Also many Heller/Helder's emigrated, especially to Michigan, and this is why this page is in English.

So far the Helder family starts with the couple Jan Jacobs x ImkeSijgers, married in 1694 in Pieterburen.

- in  the file Jacob Jans  (born 1697 Pieterburen), son of Jan Jacobs and ImkeSijgers, his descendants  are given. His son Jan Jacobs (born 1721 Wierhuizen,Pieterburen) is since 1757 in the records indicated with the surname HELDER.

- in the file PeterJans(born 1695 Pieterburen) , also son of Jan Jacobs and ImkeSijgers, the descendants of Peter Jans  and AnjeJans (born 1699 Wehe) are given. In a report of a lawsuit made at 29 April 1747 Peter Jans is indicated with the surname HELDER,sofar the oldest record of this surname for my family.
The file contains considerable data on immigrants to Illinois and especially to Michigan. The couple Jan Jacobs Helder (born 1823 Houwerzijl) x AlbertjeTimmer (born 1818 Zuurdijk) arrived in MI in 1856 and they were the basis of a large Helder family in MI.
AnjeBerendsHelder (born 1808 Leens) x KlaasJans Hof(f)man with their children arrived in 1848 in Michigan. Their doughter Helena (born 1837 Leens) married in MI to Albertus C. van Raalte, son of  Rev. van Raalte, who founded the Holland Colony in Michigan.

In 1811 DrewesLevys accepted BAKEMA as familyname. His father and mother were Levi Jacobs and GrietjeDrewes. They resided in the village of Eenrum, but a church record of their marriage was not found, perhaps associated with the Jewish background of Levi Jacobs. DrewesLevys (Bakema) and his sister Fijtje were baptized in Eenrum on 30 March 1806  when they were 36 years and 39 years old respectively. In the baptismal records it is explicitly stated that they had a Jewish father.
The data on the Levi/Bakema family are summarized in four files: the first file contains the oldest data on the first two generations, and there are three files on the descendants of the three brothers David-, Drewes-, and EilkeLevysBakema.

- The first two generations of the Levy/Bakema family in Eenrum/Pieterburen.

- Descendants of David LevysBakema.
David (born 1761 Eenrum) was a carpenter. In the next generations many were craftsmen (carpenters, shoemakers and tailors) and in later generations intellectual professions (physicians, teachers, accountants) became important. My grandmother IetjeBakema (born 1887 in Bedum) descended from David Levys.

- Descendants of DrewesLevysBakema.
Drewes (born 1769 Eenrum) was first a butcher in Eenrum and later a carpenter in Pieterburen and built together with his father in law (RinnePieters) the tower of the church in Pieterburen as we can read today on the memorial inscription attached to the tower.

Also the interior of the church in Eenrum was restored by him and Harm Finkeles in 1811-1812. The contract for this work was signed by him as "DrieuwesLevides".


I started my research in 1997 and the present database contains about 14500 persons. The data accumulation was not only  carried out by searching the archives, but also by communicating and searching on the Internet. In 1999 a number of "Hogeland" genealogists shared their knowledge on a common website concerning the Helder family and this made it possible to connect many Helder fragments into one large database. My thanks for this go especially to SjouwkeNube, MenneGlas, and RijkHelder. JurVisser (Haarlem) exchanged a wealth of data on the Bakema family.

For comments and responses (very much appreciated!!) mail me: whelder@xs4all.nl